Five test automation challenges and how to overcome them

Unfortunately, there are still major hurdles to test automation that can cause significant issues while impacting app speed and quality. Here are five common test automation challenges and how DevOps teams can work to overcome them.

The global talent shortage affects nearly every industry, so it tracks that one of the biggest challenges to adopting test automation is finding and retaining the talent you need. Techstrong Research data shows that over 88% of companies struggle to find, hire, and retain quality testing and automation support engineers. The global quality engineering talent scarcity impacts the quality and speed-to-market of products for companies, causing delays and often cost overruns. At the same time, DevOps teams are being asked to release code more quickly than ever before.

Many companies will need a strategic combination of digital tools, platforms, and software testing teams to bridge the talent gap. So first, to meet this challenge, explore multiple software testing staffing models. Do you have the existing infrastructure to support full-time QEs? Or do you need to leverage QEs through an outsourced testing partner? Outsourced testing is an excellent option if you need a consistent, knowledgeable QE/QA team to cover many locations/devices, prioritize continuous testing, and develop an automated strategy with dedicated partnerships to help.

From there, your QE team can focus on test automation development that optimizes and fully integrates existing manual processes and human testers with new automated resources.

Automation provides an efficient way to test code, but as more tests are introduced, it can create bottlenecks in the system. The sheer volume of tests and testing types can sometimes be overwhelming, backing up the queue and slowing delivery. Test runs start to get delayed. Test results are late, flaky, or rushed. Then, when broken scripts or flaws are introduced into the testing environment, the problems only magnify. Engineers must be diverted to repair the testing environment, removing them from other duties and slowing down the development cycle. 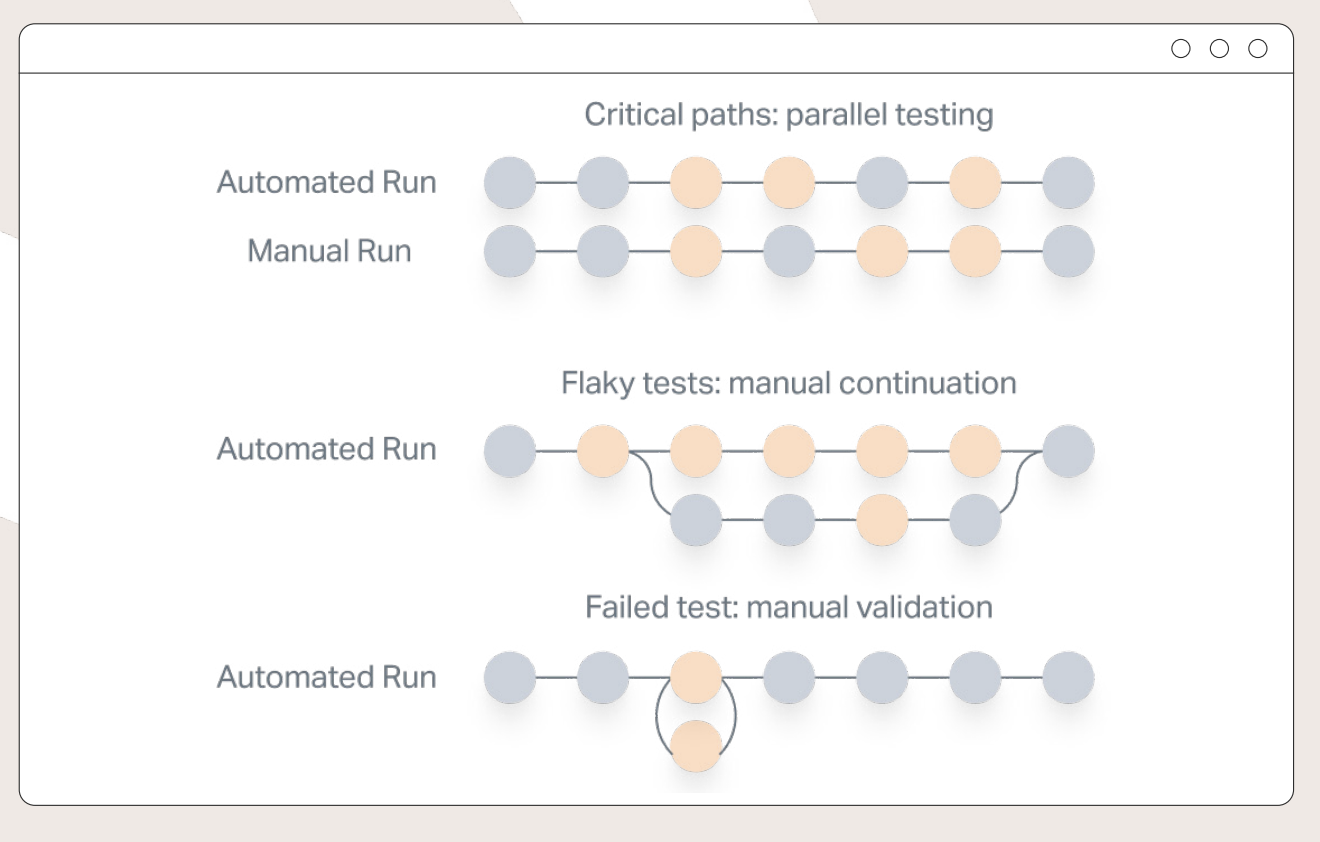 Too often, separate tools and platforms are operated in siloed environments, requiring additional work, such as adjusting file formats during handoffs. It also creates a need for more visibility between processes or team members; perhaps some are utilizing tools, and others are not. Yet, many DevOps teams accept that it’s the way things are and work around it — leading to repetitive, manual processes that can introduce human error when they could be automated.

Don’t settle for inefficient or non-existent communication and integration between your platforms. The right toolchain can make all the difference in testing environments. A fused testing pipeline with integrated tools can accelerate the DevOps process and avoid errors. By creating a seamless workflow, you can generate a complete, end-to-end approach for testing. For example, Testlio has developed an integrated fused testing toolchain that can help accelerate testing by using the following:

Software devs are under pressure to make tradeoffs on speed, quality, and feature sets to meet deadlines for release. Though automation is often touted as the ultimate solution to speed issues, developers must be careful about which tests they automate and which they do not. Unit tests, API tests, and UI tests are prime for automation.

But automated tests can only notice some of the apparent issues that manual testers would see, specifically in usability, exploratory, and localization testing areas.

Manual testing is essential for verifying new features and offering actionable reproduction instructions for issues missed by flaky or broken automated scripts. While automated testing offers immediate test execution, manual testing provides flexibility and coverage that only humans with real devices and localized insights can perform. The real solution to missed issues during automation is to fuse manual and automated testing, merging machine and human resources to test in parallel.

Read how NFT marketplace LGND fuses manual and automated testing for a 98% reduction in testing time and a true CI/CD pipeline.

One of the most time-consuming parts of the test automation development process is developing the scripts and testing environment. Getting it right from the start is crucial since flaws in the writing, implementing, and maintaining scripts can degrade app quality and cause significant rework. It’s also expensive since you’re paying QE talent to manage the process.

Solving this test automation challenge requires rethinking the workflow. For many, testing comes near the end of the development cycle. Today, however, there’s an increasing movement to shift left and integrate testing earlier in the CI/CD pipeline. Shift-left testing reduces costs by testing and solving problems earlier in the development cycle. Defects get repaired as they are found rather than waiting for the final testing cycle. Once this process works, it provides a continuous testing environment that reduces bugs and errors in the early stages, saving precious dev time.