Faced with skyrocketing consumer expectations and rapid industry shifts, 54% of development teams are struggling to keep up with software delivery. While organizations are turning towards automated testing to help bridge the gap between speed and quality, 64% of DevOps teams are struggling to find the talent needed to support those initiatives.

Over 1,200 engineering and DevOps professionals shared their perspectives on the talent shortage, automation, and shift left in a new survey from Techstrong Research and Testlio. Progress has been made thanks to new new approaches and methodologies, but challenges remain, especially when it comes to hiring and retaining quality engineers. Organizations need to find creative solutions, tools, and partnerships to bridge the talent gap.

Below we highlight three key findings from the survey, as well as strategies for achieving speed and quality without compromise from Testlio’s own April May, Vice President of Testing Advisors, and Emeka Obianwu, Vice President of Partner Ecosystem.

Only 12% have the right talent to support automation

Techstrong Research data shows that over 88% of companies are currently struggling to find, hire, and retain quality engineers for testing and automation support. The global quality engineering (QE) talent shortage is hindering DevOps teams from meeting the demand for constant releases.

To solve this problem, teams need to develop highly specific, individualized maturity models that leverage automation to optimize their continuous testing and feedback loops. For many company, a strategic combination of digital tools, platforms, and software testing teams will be needed to bridge the talent gap.

“The lack of quality engineers to support testing and automation is an indicator of a changing consumption model and the way demand for automation is being managed,” May said. “This issue is an opportunity for companies to look at more creative strategies to fill this need.”

“If you optimize automation and you optimize how you’re using humans across your tests, there’s still value lost there if you don’t take the time to optimize intelligently, together,” Obianwu said.

Optimizing speed and quality by embracing fused testing is a solid footing for companies struggling to meet demand. Fused testing strategies combine the skills of expert manual testers with the efficiencies of test automation, empowering teams to balance quality, speed, and coverage in the software development process.

54% of DevOps teams can’t keep up with demand

The constant demand for new software features, capabilities, and updates heightens the pressure for enterprises to deliver quickly. The balance, however, is often precarious. The survey revealed that 54% of respondents can’t keep up with the demand for new and updated software.

Companies struggling to meet the demand often sacrifice quality in favor of speed, resulting in low-quality software that meets release schedules but fails consumer expectations. With incomplete or surface-level testing prior to release, it’s just a matter of time before quality issues reach consumers and have detrimental effects, from consumer distrust and increased churn to hundreds of wasted dev hours. 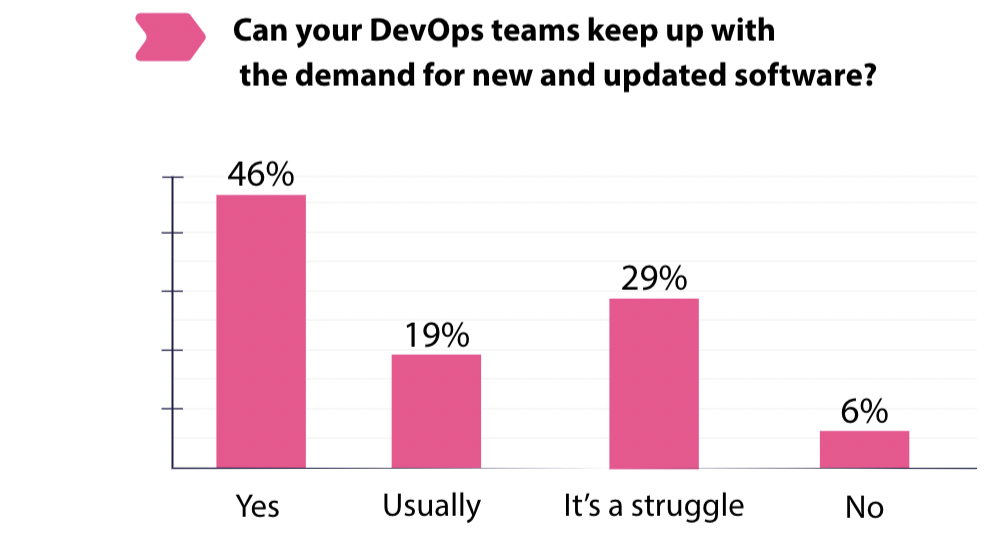 To balance the need for speed and quality software, Obianwu recommends avoiding a zero-sum game. Iterating quickly and developing quality software do not need to suffer at the hands of each other. In a highly optimized software development cycle, dev speed and software quality should thrive together in seamless proportion.

Avoid the external pressures to choose between speed and high quality and optimize your products across both dimensions. Companies that are agile enough to meet tight release schedules with modern software that is rigorously tested by shifting left to enable continuous testing, rather than follow traditionally siloed development cycles.

79% of companies are integrating testing in CI/CD pipelines

With engineering teams under enormous pressure to predictably ship bug-free products, many are adopting shift left methodologies, continuous testing strategies, and rigorously closed feedback loops in order to integrate testing in every part of the CI/CD pipeline.

Techstrong Research found that 58% of businesses think shifting left means enabling continuous testing; this signals an industry-wide change from years past, where shifting left was synonymous with shifting the burden of testing onto developers.

Shift-left testing can reduce costs significantly by testing and fixing issues earlier in the development process. It reduces the number of bugs and errors in the initial dev stages by aligning code with early test cases. Defects are fixed as they’re discovered rather than after the final testing cycle, saving both costs of repair and precious dev time.

The subsequent shift is full testing integration in the CI/CD pipeline for continuous testing and a more unified process. Moving toward continuous testing requires all teams in the software testing cycle to work together, separately, and simultaneously for speed and quality control.

Continuous testing does not simply mean adding more runs, but elevating the role of testing across the entire workflow and designing test runs to integrate into existing processes seamlessly.

A typical testing cycle sees DevOps teams deliver code, testers run tests then ship back problems, and the cycle repeats. Shifting left and removing the silos that currently see DevOps and testing teams working separately eliminates the need for lengthy back and forth.

Continuous testing should increase the speed of the DevOps cycle. Devs unit testing their code leads to better code being tossed over the wall to testers. Test-driven development ensures all code passes testing before being promoted forward and reduces compounding errors and bugs that take longer to fix later.