The mobile app customer experience is more than simple UX design. It encompasses the experience that users get across all of the brand’s channels and includes all the interactions as a user identifies, evaluates, purchases, uses, re-engages, and leaves the product.

A recent report noted that users downloaded 204 billion mobile apps globally in 2019; and customer churn is easier than ever. Establishing a lasting relationship with consumers is based not only on giving them what they want but also on gaining their trust. Trust in the brand, trust in data security, and ultimately – trust that the product works.

The costly price of software bugs

Test early and test often — that’s key advice to avoid the high cost of deploying a software laden with bugs. But a bug might not seem devastating without understanding the full scope of financial loss it can bring.

In 1999, as the public faced a new Millennium, U.S. businesses and government agencies paid $500 billion to fix a simple calendar error. Multiple types of software had reduced calendar years in data sets to the last two digits of the year. Had it not been addressed, an error in reading 00 as 1900 and not 2000 could have caused huge issues for government, financial, and medical sectors.

Since then, the price of bugs has continued to soar, especially in the business software sector. An Undo research report noted that:

The value of QA testing

Fixing software bugs is incredibly costly – in both the direct cost of mitigating the defects and the indirect cost of decreased consumer trust and lost development time. Simply put, the cost of repairing most bugs is higher than the cost of preventing it.

The cost of detecting and fixing defects in software increases exponentially with time in the software development workflow. IBM found that the cost to correct an error discovered after product release was four to five times higher than if it’s uncovered during the design phase, and up to 100 times more expensive than if identified in the maintenance phase. Why?

5 ways to decrease the impact of software bugs

Test processes should be well-planned, defined, and documented. Good documentation, like bug reports, are an important tool that allows testers to communicate vital information with engineers in order to fix the majority of bugs

Over the last few years, companies have adopted the CI/CD pipeline to streamline software development. This method focuses on automated unit tests via Test-Driven Development (TDD) to ensure the application doesn’t break when new commits are pushed. Code must be tested and passed before being released.

These automated testing methods improve existing manual testing processes by reducing the amount of time and work required. Continuous integration also helps ensure that changes to the code are small and manageable, so it’s easier to detect issues, streamlining the process further.

In a “shift-left” approach, teams prevent instead of react. Doing smaller tests more frequently throughout the development stages, and creating a continuous feedback flow allows for immediate validation and improvement.

Consider pairing testers with developers to run tests before building and provide feedback to help with development decisions. Remember that tests performed earlier in the pipeline don’t replace the testing done before deployment – they complement them and reduce the chance of having problems go undetected.

There are several steps that occur between writing code and putting it into production –  pre-production testing being an incredibly important part of the QA process.

By diving into pre-production testing – payment gateways, functional tests, usability and CX concerns – you can monitor testing environments, test cases, and possible user paths that can provide insight into what could go wrong when code is finalized and goes into production.

Sometimes, it’s easy to replicate an error… sometimes it’s not. In either case, you must collect all necessary information regarding the bug when it occurred.

A defect tracking tool, however, is only as good as the data entered into it. With instrumented testing, product teams receive high-quality bug reports with complete data and session information, giving development teams access to contextual information quickly and efficiently.

Instrumented testing can dramatically accelerate and improve your issue management process so you can deploy with confidence. 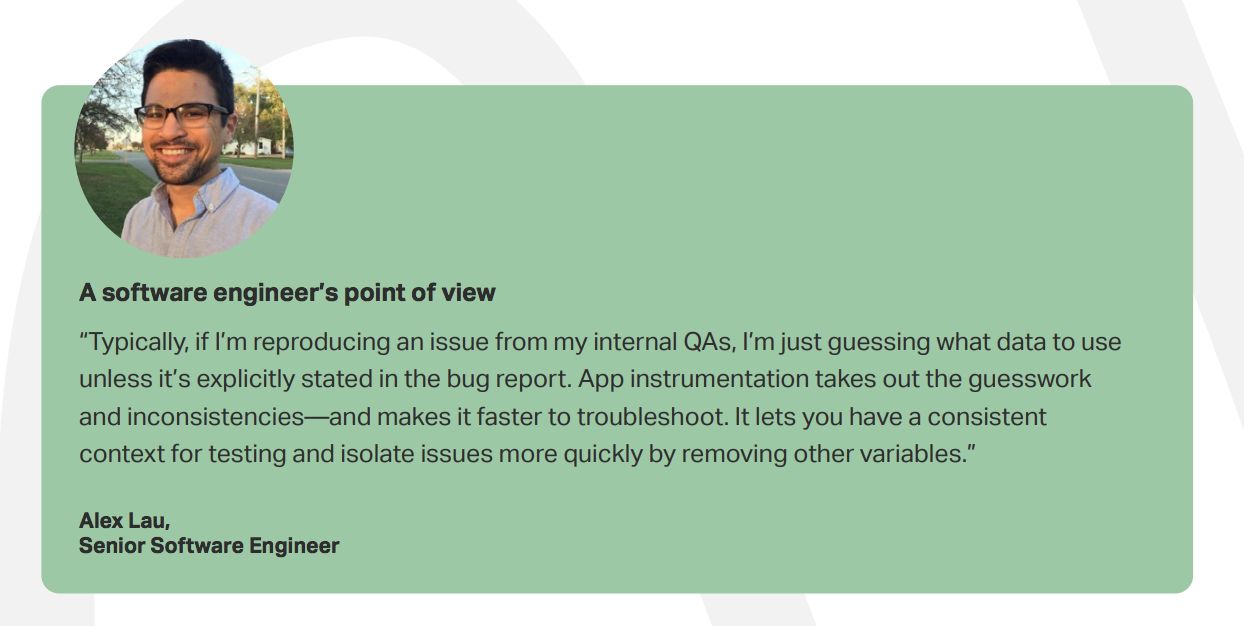 Without the resources you need when you need them, it’s difficult to ship product updates quickly and efficiently. With a “collective” approach to testing, you get the best of both worlds – with a combination of experienced internal and external QA teams.

Collective testing is a blended team approach that aligns processes and tools into a seamless workflow. It enables multiple forms of collaboration by organizing different test teams to cover more testing surfaces in less time, under a unified test management platform.

The business cost of software bugs is a combination of money, time, and reputational damage. Putting software quality first will protect not only your revenue, but also your relationship with current and future customers.

While we can’t expect to deploy a product that’s 100% error-free, we can make strides to safeguard software prior to release with a thorough testing strategy.

Need a hand tackling bugs? See how Testlio can help.